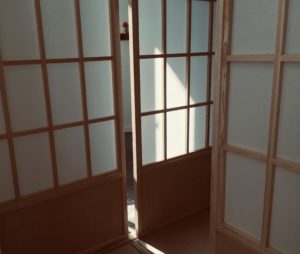 I live in a three-generations household with my parents and grandma. My grandma was born (probably) in 1922 during the time when Japan ruled Taiwan. My parents were both born in 1955 in the middle of the martial law period. And I, I was born in 1988 and is the member of the generation right after the termination of the martial law.

When he was little, my dad relocated quite a lot with my family. The last destination and the place he so-called “childhood home” till these days is a Japanese-style-cottage in Chiayi county, a town in west Taiwan. My mom comes from Hualien county in east Taiwan and lived her childhood in a Japanese-style-townhouse that was floored with Tatami mats and designed by her father (The decision of such flooring may come from following the trend of time or being bounded with the habit). After my parents got married and bought their own apartment in Taipei, the capital in north Taiwan, they decided to construct a Japanese-style-room, a Washitsu, in a modern living planning. This room later became my bedroom.

This room, my bedroom, is like a mix of identities of generations— it includes the identity of my grandma, an old lady who is still used to listen to the news channel in Japan; the identity of my parents, a couple who has entertained themselves with only Chinese-Mandarine TV programs and still kind of believes that no other political party can represent the country better than Kuomintang (the Chinese Nationalist Party); and the identity of myself, a blurry one that is timely confused for not being defined by single culture but various of them.

I wish to reproduce the sight of that room and all those lostness and oddness about it in my memory. The stage itself is a story about a three-generations-household in current Taiwan and how its member’s identity collides, affects, and changes each other’s. The audience would have to choose from a set of props— a letter, a tape, and a headset, or a photo —before entering the room. Each prop is a lead or a leftover piece to a story path, urging the audience to “treasure-hunt” another story-related object such as a letter being hidden under the floor, or a hanging cloth. These objects and story paths are the symbols of those ongoing questions in every Taiwanese family: “Who is a Taiwanese? Who composes a Taiwanese family? Would the definition of self-identity remain in a certain situations or it will keep changing through time?”