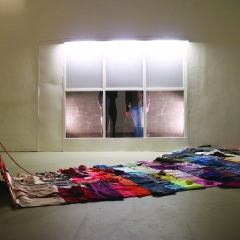 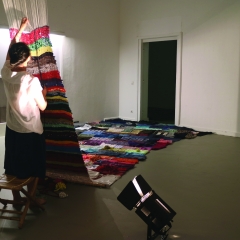 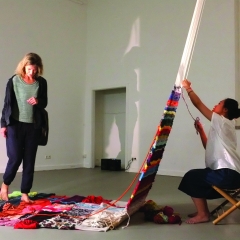 The difference between the exhibition version of (Ausencia) Die Abwesende and the theater version is that it lost the dancers and left with only the wavering performer.
In this version, I used the bodies of the other (unsuspecting) audiences to replace the dancers–they became the image of the varnished bodies. To achieve this, I built a display window and created two spaces: the exhibition area and the performance area.

The translucent, one-way foil divided the display window into two parts: upper and lower. The audience in the exhibition area can watch the ‚performance‘ through the upper part, like in art museums, how one sometimes view artworks through glass windows. The audience in the performance area can see the bodies in the other room through the lower part of the windows. The bodies of the coming and leaving audience in the exhibition area inadvertently played the roles of the missing bodies–the central concept of the piece. I took advantage of the habit of art-viewing in museums: the audience had no expectation and no instructions to be part of a stage, nor to perform. At the same time, they had many possibilities to move between the two rooms, to take different perspectives and participate in the work.